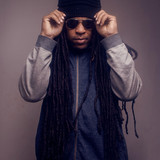 Axel Dorothea is a Groningen based artist, songwriter, and music producer that make dancehall, hip hop, latin pop and afropop. His music has honest conversation tone and always has a dynamic diverse vibes and dark flavour about them.     After many years of messing around in music, he began putting out, his own music that he being working on. Rather than working in sleek High end studios, he collaborated and make music in the room of his home in Groningen , building his sound from the ground up. He writes his music from a very honest and personal perspective, crafting engaging stories and developed melodies.   Axel draws heavily inspiration from; rough underground hip hop, soul, and reggae singers he emulated growing up. Career highlights include playing at the Pinguin Radio Showcases besides the Eurosonic Noorderslag before the quarantine.   For 2021 l'm consistently releasing songs that feature a variety of independent styles while sharing my story on Instagram and YouTube.   Hit play to join the party!