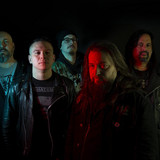 Ringworm erupted in Cleveland in 1989 as an integral part of the city's hardcore scene. They joined bands like Integrity in a brutal musical community that blended purist hardcore with heavy metal influences and punishing live shows. They played constantly for four years all over Ohio and West Virginia, securing a rabid fan base who embraced their 1991 self-titled demo and bolstered their reputation among the thrash underground in the continental U.S. Their debut full-length Promise appeared in 1993 on Incision, and garnered enough interest to tour the U.S., following the release with several singles that cemented their reputation, even as they transitioned toward thrash metal. They have pursued this direction -- without forsaking their hardcore roots -- ever since. After the inevitable round of lineup changes throughout the decade, the band went on hiatus, re-emerging in 2001 with Birth Is Pain on Victory, where they remained through 2005's effort Justice Replaced by Revenge. Touring between albums became even more difficult as vocalist Human Furnace (aka James Bulloch, the band's only permanent member) started a chain of tattoo shops called 252 Tattoo, while guitarist Frank Novinec joined Terror, precipitating another break. They reunited for 2011's Scars with a new lineup. In 2013, it was announced that Ringworm had signed with Relapse Records. After teasing fans with an EP that same year, they issued 2014's Hammer of the Witch, which charted at number 14 on the Heatseekers chart, ushering in a new era of success. Ringworm delivered Snake Church two years later and resumed a grueling international tour schedule in clubs, theaters, and on festival stages. In the spring of 2019, they dropped their third long-player for Relapse. Entitled Death Becomes My Voice, it was recorded by longtime collaborator/engineer Ben Schigel and Noah C. Buchanan. ~ Eleanor Ditzel, Rovi