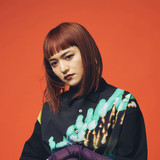 iri is an up-and-coming singer/songwriter based in the ocean-side city of Zushi, in Kanagawa, Japan. She began her career after winning a 2014 audition hosted by NYLON JAPAN magazine, and since then has quickly generated buzz for her hip-hop influenced alternative style and soulful voice. Her first album, "Groove it," was released in October 2016 and immediately entered Japan's iTunes Store Top 10 album chart and also topped the hip-hop/rap charts. In March 2017, she released her next single, "Watashi" which was chosen as the commercial song for Nike Women Japan. She saw more success with her next two releases, an EP "life ep," and her second album, "Juice," which also did well on the iTunes and Apple Music charts in Japan. She has also opened for notable Western acts, such as Donavon Frankenreiter and Corinne Bailey Rae, and was invited to perform at parties for high fashion brands, Chloe and VALENTINO, proving her versatility and appeal across genres and styles.