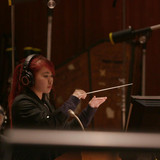 Jaimie is violinist and a music composer for film, TV and games. She was born and raised in the Philippines, and is now currently based in Los Angeles, California. She went through the film scoring summer program at New York University in 2017 with a full scholarship from the SOREL organization. Eager to learn about the art more, she fully pursued film scoring through Master of Music in Screen Scoring program at the University of Southern California. Prior to pursuing music, she worked in IBM Philippines as an Information Technology specialist and has gotten a patent for a hit song generator their team developed from IBM Japan and Singapore.