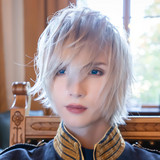 (Check out YOHIO's bands DISREIGN and Awoken By Silence as well) With a family tree consisting of all musicians and actors maybe it is not that strange that the DNA that created YOHIO turned out a multi faceted diamond. With his extravagant way of expressing himself, the looks of a visual prince, a singing voice which can tackle English, Japanese, and Swedish, his naturally confident stage awareness, and his undoubtedly great fashion sense – YOHIO has captured the heart of thousands of fans all over the world. In 2012, YOHIO released his Japan Solo Debut Mini Album REACH the SKY」.(Universal Music Japan. To promote the Mini Album, YOHIO appeared at Shinjuku Station Square in Tokyo and drew a crowd of 6,000 people. He has also appeared on several Japanese TV shows like「:笑っていいとも!」(twice!) 「スッキリ!!」 「アッコにおまかせ!」 「ネプ&イモトの 世界番付」「PON!」, among others. He got great attention and started to build a loyal following of fans. The same year, YOHIO played at SUMMER SONIC, backed up by support members from the visual kei band DuelJewel. In the year of 2013 the 1st Solo Album「BREAK the BORDER」was released in both Japan and Sweden – one version with all the songs in Japanese, one in English. AWARDS & CHARTS (SWEDEN) PLATINUM AWARD: Heartbreak Hotel GOLD AWARD: BREAK the BORDER GOLD AWARD: To the End #1 ALBUM CHART- BREAK the BORDER #1 ALBUM CHART – Together We Stand Alone