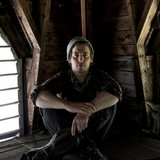 Anthony Wallace is a composer, sound artist and filmmaker. His musical pursuits have taken him on adventures in West Africa where he studied hand percussion and drum construction, to the far north in the Arctic Circle making installations in canyons and down south to the Caribbean to produce dance music. He is the Producer and Co-director of The Peel Project, an interdisciplinary Feature Documentary and touring Art Exhibit exploring six artists journey through the Peel River Watershed in the Yukon and Northwest Territories. Anthony’s music has been played on the CBC radio, his sound installations have toured nationally and he has worked on film/TV productions for CBC, APTN, Vision TV and Historica Canada. Anthony obtained an Honours BFA in composition from York University and is the founder of Studio 110 a multimedia production company based out of Toronto.