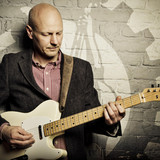 Marcus Klossek is one of the growing number of guitarists who perform jazz on a Fender Telecaster, the archetype of the electric guitar. A class of musicians that consists of many extraordinary artists; from Jimmy Bryant to Ed Bickert, Bill Frisell, Mike Stern, Jim Campilongo or Jakob Bro, just to name a few. An established name within the Berlin jazz scene who knows to get to the point with his Electric Trio. A guitar, bass and drums; that's all it takes to make the songs of Marcus Klossek sound great! His brand new album “Time Was Now”, the 8th release as a bandleader and the first one for Double Moon/Challenge Records, is another proof of exceptional storytelling composing skills which go far beyond the average guitar release. Marcus Klossek has toured countless european clubs and festivals since his music studies at the University of Arts in Amsterdam. He has also been an instructor for guitar, ensembles and workshops worldwide for many years. Incidentally, his virtuoso guitar playing has made him one of the busiest musicians with dozens of great appearances on albums by bands and projects of the german jazz scene. Really good stories don't need to be flashy and loud in order to lodge themselves in our hearts.   "Tele-Jazz at it's best!" Concerto  „In Jazz there is a demand, that with the instruments stories should be told. Marcus Klossek, the guitarist from Berlin, is someone who has internalized this.“ Martin Laurentius, Jazzthing 96 www.marcusklossek.de