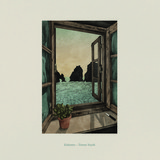 Music can be heard, described, categorized and analyzed in countless ways. Theodor W. Adorno for instance distinguished between popular and serious and by this gave music a difference in value which is still in use today. But no matter how one approaches music, it is for sure that music is socially produced as well as socially productive. Since the founding of Kokomo it is this social enviroment that drives us as a band. Founded in 2008, we played our first tour in autumn of the same year followed by countless concerts up until today and hence friendships in many parts of Europe and a tour in Japan in autumn 2015. Kokomo is an instrumental rock band founded and grown up in the heyday of abandonment of vocals in “modern” rock music. We never frantically tried to reinvent the genre, but we hope we can set ourselves apart with new album and upcoming shows, reach people and evoke something in them. Then we have achieved all of our significant aims. Neglecting vocals is not a trend for us, it is conscious backpedalling. We want particularly to let the music speak for itself and think trough this to be able to say much more in the end. Right from the start our main focus was to have a good time, put a lot of love and effort in our music and everything related to it and play live as much as we can. Both on several tours we did and as support for acts like Caspian, God Is An Astronaut, Junius, A Silver Mt. Zion, This Will Destroy You, Maybeshewill and many more.