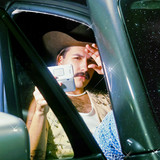 844-MM1-LOVE ☎️ CALL ME pre-save 'i don't wanna talk about love' so the spotify angels bless me with playlists <3 merch & pre-save available @ STACHEPAPI.COM - michael medrano, aka disco dad, aka stache papi -- both nicknames affectionately given to him by his fans (who also named themselves: medranhoes) -- is back for your pleasure. since releasing fluids he's gone on to co-pen a radio top 40 single (STOP by epic recording artist AJ Mitchell), seen radio play with his Dance Yourself Clean x Strange Talk collab Sugar (Strange Talk Remix) and is now set to release his first ever body of work. the upcoming lead single, "I DON'T WANNA TALK ABOUT LOVE" was co-penned with emma rosen (sony) and dan gleyzer (epic). the 'no love' anthem is already gaining traction across social media (almost 100k views on tiktok right now). 2021 has been a whirlwind for michael, but 2022 looks like it's only gonna get bigger. be there for it all, follow disco dad on all social media now!