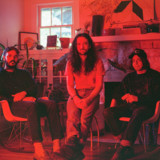 Nashville’s Sun Seeker plays with the effortless precision that is hard-won over time — emanating the breezy confidence that comes with years of collaboration and friendship. Alex Benick (guitar, vocals), Asher Horton (bass guitar), and Ben Parks (drums) have cultivated their tight-and-loose pocket of psychedelic folk rock since they were high schoolers cutting their teeth in the immersive underbelly of Music City’s early-aughts indie rock scene. The trio’s jangle-pop lens on timeless folk songwriting has landed them on genre-spanning bills with the likes of Whitney, Beach House and Peach Pit; and on the roster of Jack White’s Third Man Records, which released the band’s debut EP Biddeford (2017) to wide acclaim. A Sunrise In a Basement is the much anticipated follow-up to 2017’s Biddeford, and it illuminates what Sun Seeker does best with more clarity than ever. Engineered and produced by veteran Nashville musician and producer Patrick Damphier (Night Beds, Stone Jack Jones) and featuring guest vocals from Emily Hall and Liza Anne, the trio tracked the record at Pentavarit Studios in south Nashville over a series of after-hours sessions in early 2020. There’s a joyous spirit to the collaboration, resulting in a focused sonic journey that travels lightly yet deeply.