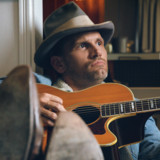 Country music is like breathing to Michael. It’s been part of his life since birth. “My parents knew Bill Monroe for years,” Goodman recalls. “They were good friends and they all went to the same church. When I came along they asked him if they could name me Monroe, and Bill was thrilled. We used to go backstage at the Opry with him every weekend. It wasn’t until years later that I realized how surreal it was.” Michael carries that legacy of Bill Monroe in many ways. It blazes in the title cut of the album, and also in the aching “Rosine I Cry,” a lament for where the Father of Bluegrass was born. “Drunk Again” is about growing up with a father who battled alcoholism. “When you’re a kid you don’t think about it, you don’t know any different and you take all those crazy events in stride. It’s only looking back that you have perspective. I know I’m not the only one to endure such.” And just like every life, there’s plenty of joy alongside the sorrows of the past. “Concerts In My Underwear” is a slyly sardonic love song, both tender and funny, while “I’m Just Country” stands as his proud manifesto. “People have these stereotypes of country music and hillbillies,” Goodman observes. “All the clichés, but the truth is more complex. I grew up poor in a small town in Kentucky. That doesn’t make us backward though. We dealt with life’s struggles and that just makes us more resilient. I’m awfully glad I grew up in Kentucky the way I did.