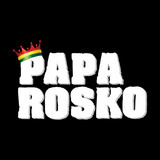 Rooted in a diverse mix of reggae with rock, Latin, dub, and pop, Papa Rosko's music blurs the lines between genre and geography. It's a sound filled with tropical grooves and larger-than-life hooks, created by a singer/songwriter whose background is as multicultural as the songs that fill his self-titled debut. Years before recording his debut album with help from reggae hit-makers like the legendary Toots & the Maytals' Toots Hibbert (in one of his final studio appearances), Third World's AJ Brown, and dancehall artist Gyptian, Papa Rosko grew up on the move. His father’s work required the family to relocate often, and Papa Rosko found himself bouncing between countries like Turkey, the Philippines, Mexico, Canada, and the US. Along the way, he fell in love with the unique sounds of each place he visited, including Caribbean music, which he gleaned from a friend in Canada, an immigrant from Trinidad. That appreciation for a wide range of music would find its way into his own songwriting, with Papa Rosko eventually finding himself in Nashville developing a singular sound that fused reggae rhythms with elements of multiple genres.