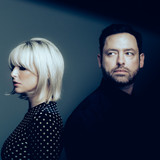 Phantogram – the New York duo of Josh Carter and Sarah Barthel— has continued to change the zeitgeist for almost a decade by consistently challenging it with their signature blend of hard-hitting beats, guitar-driven dark psychedelia, and electronic pop. Since the arrival of 2010’s Barsuk Records debut release Eyelid Movies, the pair has amassed nearly half-a-billion streams, achieved two Gold-Certified singles in the form of “Fall In Love” and “When I’m Small,” headlined sold out shows worldwide, become a festival staple, and toured with artists including The xx, Muse, M83, Alt-J and more. Their 2016 third full-length, Three, reached career-high positions on the Billboard Top 200 chart (#9) and Billboard Top Albums Sales chart (#5), as the lead single “You Don’t Get Me High Anymore” climbed the alternative radio charts. After three years of touring around the world and writing and recording new music, Phantogram returned earlier this summer with their comeback anthem “Into Happiness,” which Billboard hailed as “one of their poppiest tunes so far, a ghostly celebration of joy's triumph over depression.” The song and Floria Sigismondi-directed video also received praise from Rolling Stone, Pitchfork, COMPLEX, HYPEBEAST, Paste Magazine, PAPER Magazine and many more. They followed this up with their latest single, “Mister Impossible,” just in time for their summer North American tour and leading into more new music out this fall.