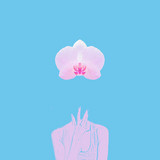 C R O W N is a singer / songwriter and possibly music's best kept secret storyteller. Her forthcoming debut album, Unlearning, serves to deconstruct traditional songwriting and concepts within her genre. Instead of speaking on universal notions of love, C R O W N explores the taboo nuances of emotions from sex, self-expression, and living and loving in the modern age of digital dating and censorship. For the first glimpse into her world, C R O W N reveals a tongue-in-cheek new single "Shit To Do”. Inspired by “f*ckboys" - from ghosting time-wasters to the patriarchy at large - ’Shit To Do’ is an anthem, calling everyone to look inward and recognize their own greatness. A lush Neo-soul composition written by C R O W N, her sultry voice takes center-stage a top of a live-band production. Delving into the song's subject matter, which at times is too-relatable and at other times almost comical, "Shit To Do" examines the crisis of womxn: how we are ever-pulled between the potential we see ahead and the echoes of our under-liberated past (and present). Featured on Unlearing out July 26th via Ropeadope Records, "Shit To Do" sits amongst seven additional singles also written and performed by C R O W N. The project follows her May 2019 EP, 'Epicene’.