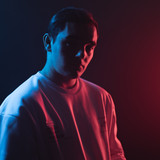 A Biography of Ampium. Ampium is a notoriously elaborate progressive house musician, Hailing from Australia, born 2002. His early years were difficult. He found respite in music and developed a sincere passion for creating music to enrapture and enthral his audience. Music production became his outlet and as time progressed, he delved further into Progressive House and EDM. A young mind Inspired by the world of Tomorrowland, he began to immerse himself into the catchy hard-hitting European House bass which reflects his Greek Mediterranean heritage. At the age of 17, George adopted the stage name, "Ampium," then later collaborated with (a school music teacher) and got started producing his own music finishing off with his first three songs a year later: "Infinity," "Cloudy" and "Festival Anthem." Ampium went on to publish one of the three records with singer songwriter ZHIKO and gained wide mass appeal! Later in 2021 Ampium released another record, Half A World Away featuring Max Vangeli