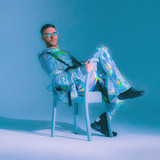 To step inside the mind of Don Diablo is to step inside the future. The Dutch visionary demonstrates a total immersion in his craft that has seen him challenge perceptions and break down creative boundaries with his numerous endeavours across the music, art, fashion and tech realms. Displaying an almost prophetic ability to tap into future trends, the forward-thinking Digital Artist refuses to be pigeonholed by just one avenue of his illustrious career. Currently voted the world’s #7 DJ on the prestigious DJ MAG Top 100, the sought-after producer has collaborated with and remixed a wide range of artists including Dua Lipa, Justin Bieber, Gucci Mane, Ed Sheeran, Mark Ronson, Travis Barker, Miley Cyrus, Rihanna, Madonna, Ty Dolla $ign, The Chainsmokers, Coldplay and many more. Ever the perfectionist, the last couple of years has seen Don prepare his third studio album FORΞVΞR, released in September 2021. Taking on many forms since its inception, the album has been a labour of love for the perfectionistic Dutchman, marking his ever-evolving sound and ability to approach new genres with familiarity. A consummate presenter, Don has hosted his hugely popular Hexagon radio show for over six years and is currently broadcast in over 68 countries to millions of listeners. Launched in 2015, his Hexagon record label has given him the perfect platform to champion new talent. Year after year, the label remains one of the most influential imprints in the electronic music sphere.