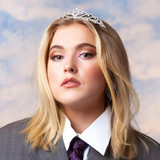 LOVA emerged as Sweden’s most in-demand new musical export in 2018 with a combination of truthful and thought-provoking lyrics and massive melodies. Following the arrival of her debut EP Scripted Reality, she quickly garnered the praise of The Guardian, Refinery29, GQ, Idolator, EARMILK, Hillydilly and more. Not to mention, P3—Sweden’s biggest radio station—named her breakthrough single “You Me and The Silence” as its “most played song of the year by a Swedish artist” as cumulative streams over 14 million and counting. Additionally, she received a nomination in the category of “Best New Artist” at the P3 Guld Awards 2018 and "Best Pop" at the same show 2019 —Sweden’s equivalent of the BRIT Awards. Plus, YouTube Music proclaimed her an “Artist to Watch” for 2019. She’s providing a powerful perspective on pop with a purpose. LOVA has released two EP:s, "Scripted Reality" and "A Gentleman's Guide". Her debut album "Grown-ish" is out now!