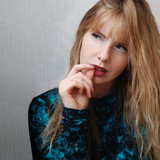 Nika Timos(born July 21, 1994. St.Petersburg, Russia) is a metallurgist with a bachelor's degree. She worked at a plant for four years , learning the properties and structure of metal. But that's a completely different story... Nika Timos is a singer, songwriter, beat-maker, producer and composer based in Oxford. From the age of eight, she attended music school(piano class) for seven years. Not particularLy satisfied with singing in the choir, Nika began to compose her own songs. In 2019, she finally decided to show the world her music and independently released her first single "Freedom" in October 2019, thereafter new songs have been coming one after another in quick succession. In February 2021 Nika got her single Fall featured on BBC Introducing in Oxfordshire. Her singles Crash, Hate You and Shameless were played on radio stations all over the world. All songs were written and produced by Nika. ''You can genuinely imagine this[the single Family] getting picked up by some serious influencer somewhere along the line and racking up the streams by the million. This month’s track most likely to end up playing at next year’s BRIT Awards''. - The Nightshift Magazine ''Songs like this are hard to find nowadays. I believe that Nika has a unique way of crafting music'', - The Lefuturewave about ' Family'.