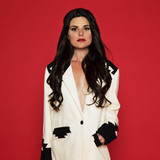 From a certain angle, the title We Still Go to Rodeos could be seen as Whitney Rose running a preemptive defense of the eclecticism of this, her third full-length album: despite indulging in a variety of sounds and styles, she still plays country music. Rose is indeed rooted in country, as she has been in her previous recordings, but it's an expansive definition of country, encompassing soul, rock & roll, power pop, and anything that could be classified as either Americana or roots rock. Paul Kolderie -- a producer who's previously worked with Uncle Tupelo, Morphine, Hole, Buffalo Tom, Radiohead, and Belly -- helmed [the album], helping steer it in a softer, more supple direction, one that suits her lighter touch and showcases her versatility. At times, Rose can crank up the tempo and amps -- she rages on "In a Rut" as she attempts to pull herself out of the doldrums -- but usually when the pace quickens, there's a snap and jangle, suggesting a cross between Tom Petty and Nick Lowe ("Better Man" plays like a Carlene Carter-fronted Rockpile). Much of We Still Go to Rodeos simmers, though, whether it's the Southern soul groove of "You'd Blame Me for the Rain" or the sepia-tinged sigh of "Home with You," which conjures ghosts of '80s country. Rose may tend to nod at the past but she's not a revivalist, she blends these familiar sounds in slyly idiosyncratic, personal ways that give [Rodeos] a handsome, modern feel that's distinct from other retro-minded Americana records.