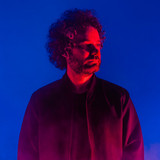 Luke Million aka ‘The Synth Lord’ is a musician and producer from Adelaide, South Australia. He uses vintage synthesizers and drum machines to sculpt a sound that captures the essence of influences from the past, present and future. The result is a Future Retro soundscape that carries an irresistible groove. Luke’s breakout track, ‘Arnold’ hit airwaves in 2011 to wide acclaim. Since then, he’s continued to deliver ear worms like ‘Midnight’, ‘Light & Sound’, ‘Fear The Night’, ‘Back To The Rhythm’, and ‘Heard it On The Radio’ and his wildly popular take on the 'Stranger Things' Theme. Luke is a founding member of ‘The Swiss’ and has a vast catalogue of remixes for artists such as ‘Duke Dumont’, ‘Client Liaison’ and ‘The Kite String Tangle’. With an album nearing completion, Luke has given us a treat with his latest offering - ‘Recreations Vol. 1’. This the first EP in a series that reimagines some of his favourite tracks, rebuilding them from the ground up with a synthesizer fueled flare.