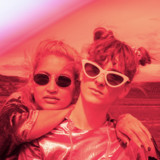 IKAN HYU was founded in the end of 2016 by two musicians from Winterthur/Zürich, Switzerland. Their reputation as an explosive duo created waves throughout the Swiss music industry - before they released their first EP „ZEBRA“ in October 2018, IKAN HYU had already played over 50 concerts throughout the country, one of which as the supporting act for the English band Royal Blood. With ZEBRA the IKANs were awarded the „SRF Best Talent“ for the month of November. * In February 2019 the band went on a one month tour through Indonesia, Anisa’s second homeland. In the following summer they played at numerous small and several large Swiss festivals, amongst which the Winterthurer Musikfestwochen, the Gurtenfestival and the Openair St.Gallen. Following that came a one week Sicily tour, shows at the Reeperbahn Festival in Hamburg, the Waves festival in Vienna and the Eurosonic Festival in Groningen. In December 2019 the IKANs opened the Germany shows for SOFI TUKKER. * Anisa and Hannah are masters of multitasking and each play up to three instruments simultaneously. They accompany their rap and vocals with electric and acoustic drum elements, moog bass, electric guitar and synths of all kinds. Since IKAN HYU borrows from various styles of music, attributing a genre to their sound would be pointless. Nevertheless a fitting description has established itself: Elastic Plastic Space Power Gangster Future Pop.