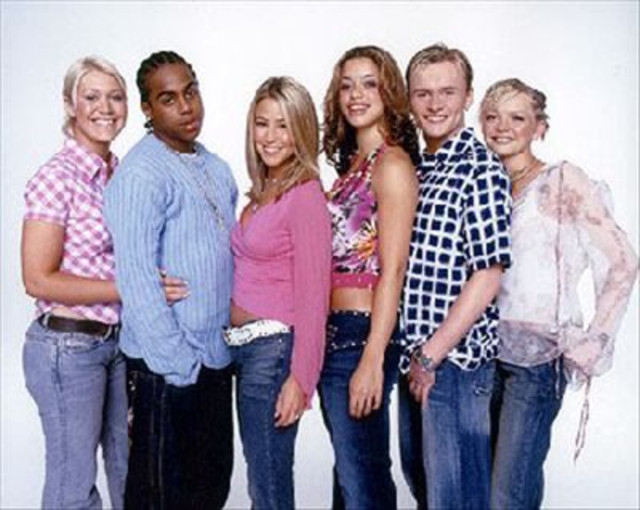 S Club 7 were one of the most popular British pop groups of the late '90s and early 2000s. Created by former Spice Girls manager Simon Fuller, the group's seven vocalists -- Tina Barrett, Paul Cattermole, Jon Lee, Bradley McIntosh, Jo O'Meara, Hannah Spearritt, and Rachel Stevens -- were selected out of nearly 10,000 hopefuls. They were introduced in April 1999 through the CBBC television series Miami 7, in which the members starred as an aspiring pop group living in Florida. It became the top-rated U.K. kids' program around the time their debut single and series theme, the Jackson 5-inspired "Bringing It All Back," climbed to the top of the U.K. chart. That October, shortly after the show debuted in the U.S. as S Club 7 in Miami, first album S Club arrived and narrowly missed the top of the U.K. album chart. "S Club Party" and the double A-side "Two in a Million"/"You're My Number One" likewise peaked at number two on the singles chart. In 2000, after the group won Best British Breakthrough Act at the Brit Awards, small-screen work resumed with L.A. 7, aired in the States as S Club in L.A. "Breathe," another retro-styled pop-soul number, served as the series' theme and became S Club 7's third consecutive number two U.K. pop hit. It doubled as the lead single for the more contemporary R&B-flavored 7, released in June 2000. The album was supported with another pair of big hits, "Natural" and "Never Had a Dream Come True." The latter, a charity recording in support of BBC Children in Need, went to number one in the U.K. and number ten in the U.S. It was also used as the theme for S Club 7 Go Wild!, a documentary series for which the group partnered with World Wide Fund for Nature. Amid the group's calendar filled with arena tours and festival performances, television series and specials, and charity work, S Club 7 maintained their steady release schedule and commercial success through 2001. During the year, they topped the U.K. chart two additional times with "Don't Stop Movin'" and "Have You Ever," the first singles from third full-length Sunshine, issued that November with the group's highest first-week album sales. Its popularity spilled into 2002, sustained by the number two hit "You," but Cattermole left the group around the middle of the year to rejoin a metal band with which he had played before stardom. He stuck around long enough to be featured in a few episodes of Viva S Club (shown in the U.S. as S Club 7 in Barcelona), originally broadcast that September through December. Meanwhile, S Club Juniors, a spin-off group formed as an opening act for their elders, achieved commercial flight on their way to evolving into S Club 8. In Cattermole's absence, S Club 7 dropped the number from their name for Seeing Double and the number five hit "Alive," both of which were released in November 2002. A musical comedy of the same title was released six months later, but shortly after that, the group announced its breakup. Within only a couple months, Best: The Greatest Hits of S Club 7 was in shops with a couple unreleased songs that kept their streak of Top Five hits intact. Partial reunions as S Club 3, S Club 4, and S Club Party occurred for performances during the late 2000s and into the early 2010s. In 2014, all seven members reunited to sing a hits medley at a Children in Need telethon. They continued in 2015 with a U.K. arena tour. ~ Andy Kellman & Heather Phares, Rovi