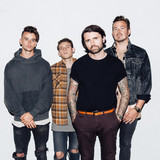 Forming in 2007, Lower Than Atlantis rose to the forefront of the underground UK music scene with their full on, in your face sound including early release Far Q. The hype built sold out UK touring and ultimately the release of World Record which, after a special night at The Garage in London, the band signed to Island Records. The band release Changing Tune shortly after and ended the campaign at Shepherds Bush in London. After some time out Lower Than Atlantis returned with the HUGE single Here We Go which spent 5 weeks on the Radio 1 A-List. The release of the Lower Than Atlantis album led to critical acclaim including Rocksound 'Album of the Year' in 2014. Lower Than Atlantis went on to sell out London Roundhouse and play huge festivals around the world. 2017 saw the release of Safe In Sound which reached number 8 in the UK Official Top 40 and led the once underground punk band selling out the infamous Brixton Academy in London.