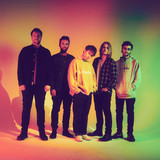 Featuring Nothing But Thieves

Hailing from Southend-on-Sea in Essex, England, Nothing But Thieves make passionate guitar-based rock that balances indie artfulness with a pop sensibility. Formed in 2012, Nothing But Thieves feature singer Conor Mason, guitarist Joe Langridge-Brown, guitarist Dominic Craik, bassist Philip Blake, and drummer James Price. The group gained early attention with several EPs, including 2013's If You Don't Believe, It Can't Hurt You and 2014's Graveyard Whistling. In 2015, Nothing But Thieves released their self-titled debut album, featuring the singles "Itch," "Hanging," and "Trip Switch," with the latter reaching number one on the Billboard Alternative Songs chart. Nothing But Thieves would eventually break into the Top 15 of the Billboard Alternative, Heatseekers, and Rock Album charts. After extensive touring, the band returned to the studio, emerging in the spring of 2017 with "Amsterdam," the lead single from their sophomore album, Broken Machine, which arrived in September of that year. The effort peaked at number two on the U.K. charts, while nudging into the Billboard 200. Months later, in 2018, the group released singles for their covers of Gnarls Barkley's "Crazy" and Jeff Buckley's "Lover, You Should Have Come Over," followed by the EP What Did You Think When You Made Me This Way? Early 2020 saw the release of the single "Is Everybody Going Crazy?" ahead of the arrival of the band's third full-length effort, Moral Panic. ~ Matt Collar, Rovi