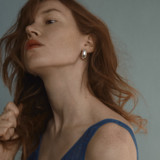 Pieces of Juno is a Norwegian artist, composer, singer and producer known for her distinct, dark and cinematic combination of acoustic and electronic sounds and working in a genre she herself identifies as Northern Noir. After years of producing electronic instrumental music and DJing the underground club scene in Oslo, she gradually found back to her roots as a songwriter, creating an album tetralogy based on the various stages of self-knowledge and the layerings of the mind; Kalopsia, Tacenda, Metanoia and Euthymia