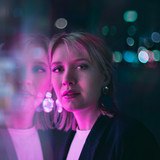 Elin Namnieks was born in the South East part of Sweden and have, at the age of 22, already done hundreds of gigs and gone to several countries to write, record and perform. She was named an "Ines Talent" in 2018, and has performed twice at Swedens biggest showcase festival "Live at Heart". Elin is constantly looking for new influences and collaborations to develop her sound and artistry, which has led her to both LA and Berlin. Elin's music has gone from acoustically influenced pop to a more electro based one that has darker, more suggestive, undertones that reflects the growth of the performer itself.