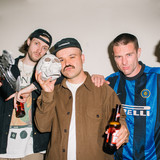 In a world of modern rock copycats, Puppy sound like nothing else. A fusion of earth-shattering riffs, earworm melodies and anything-goes experimentation, the London-based trio’s long-awaited debut album The Goat, set for release on Jan 25 2019,

is testament to their go-it-alone attitude. “We love heavier bands who seem to have something smarter going on,” explains frontman and guitarist Jock Norton, who leads the Puppy pack alongside drummer Billy Howard and bassist / backing vocalist Will Michael, “but then we also love bands who are pretty dumb!” he adds with a cackle. The Goat has plenty to offer everyone, from bullet-belted metalheads to shoe-gazing fuzz lovers; a record that thrives off its kaleidoscopic approach to creativity along with the band’s mischievous mentality. “We just wanted to push the boat out a bit,” says Jock, who acts as the band’s primary songwriter, and debut single ‘Forever’ quickly nailed these new colours to the mast. Taking the left-field melodic turns of Weezer, the hazy fuzz of Smashing Pumpkins, plus the straight-to-the bone sonics of the Big Four of Thrash Metal, the group’s idiosyncratic sound is as unique as their batshit, DIY-or-die approach to the visual side of things. When they’ve got nothing band-wise to create, they make viral memes; these, along with album art, merch designs and directing, shooting and editing the videos, are the responsibility of Will and Billy.