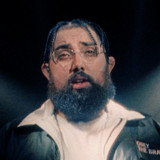 BAINS. began releasing music in early 2016, at first primarily on SoundCloud. He had his first large success with 2018s bbno$ collaboration "Bad Girl" which rapidly built buzz online and has since generated over 23 million streams across platforms as well as 2.5 million YouTube views on its accompanying music video. Following Bad Girl, BAINS released a series of singles and an ep before signing to Vancouver’s Owake Records in 2019. After the release of singles Alone and I'm Up that year, BAINS went underground and has been working on his upcoming album since. His new sound shifts darker than earlier work and features synth heavy production mixed with eerie electric guitars. BAINS influences include Don Toliver, Post Malone, and Kid Cudi.