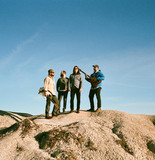 Pure X has always been out of time, their airy, cavernous sound like sunlight through the waves. Formed in 2009 as a three-piece of Nate Grace, Jesse Jenkins V, and Austin Youngblood, their early singles garnered immediate acclaim. Their first album, 2011’s Pleasure was an instant classic debut. As assured in its ambience as Television’s Marquee Moon and Massive Attack’s Blue Lines, Pleasure is the sound of being on a balcony just before dawn. On Crawling Up The Stairs from 2013 (mixed and mastered by country legend Larry Seyer), Pure X took a hard left into the abyss. It leaned into anguish, dancing on the narrative beat of a band like angels on the heads of serpents. Pure X added Matty Tommy Davidson as a full time member and established themselves as a killer live band. After extensive touring throughout 2013-2014, they recorded Angel. Lovesick and deeply narcotic, Angel completed a trilogy of hedonism, suffering, and devotion for ascension. After this, what was left to do, except go on hiatus. In 2018, Pure X quietly “reformed”. It was time for the legacy album, the slick backed, silver bracelet, black and white gravitas on the rocks album. After two years of writing and recording live as a band, their fourth, self-titled album sounds expensive and wise. These are not songs of resignation, but of unsentimental empathy. Pure X has always known how it’s going to end, but has always had the class not to ruin a great party because of that inconvenient detail.