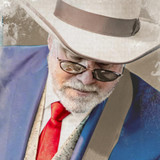 Singer, songwriter, and entertainer, Robert Earl Keen, has recorded 19 albums and performed thousands of shows. Keen is also the host and creator of the Americana Podcast: the 51st State (AmericanaPodcast.com). His music ranges from country to bluegrass to rock, and his songs have been recorded by artists including George Strait, Lyle Lovett, Joe Ely, Montgomery Gentry, Dixie Chicks, The Highwaymen, Gillian Welch, Todd Snider, and Shawn Colvin. In 2012, he was inducted into the Texas Heritage Songwriters Hall of Fame along with his college friend, Lyle Lovett and the late Townes Van Zandt. In March 2015, BMI honored him as the first recipient of the Troubadour Award. Keen’s philanthropic and charity work led him to be presented with the Distinguished Alumni award from Texas A&M University in the fall of 2018. The Texas Cowboy Hall of Fame inducted Robert Earl Keen into their 2019 class presenting him with the Spirit of Texas Award. Keen’s signature song is “The Road Goes On Forever.” (RobertEarlKeen.com)