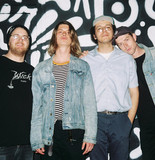 Soaked in the bright psychedelia of the 1960’s and dipped in the indie rock explosion of the new millennium, The Velveteins are best described as a bridge between the two. Inspired after living out of a camper van on the beaches of Australia for a year frontman Spencer Morphy returned to Canada and started the band with co-songwriter Addison Hiller in 2014. The duo wrote five songs in two weeks and scraped together just enough cash to fly to Nashville and record their first EP with producer Lincoln Parish of Cage the Elephant. Afterwards they wasted no time cramming into a Pontiac Montana with new found bassist Dean Kheroufi and touring across the country. This was the beginning of their vigorous touring schedule which led to international festival appearances (SXSW, and The Great Escape) and opening slots for established acts including Wolf Parade, Elephant Stone, and July Talk. All this caught the attention of indie label Fierce Panda and in April of 2016 the bands first EP ‘A Hot Second with the Velveteins’ was released. The EP displayed the bands love for 60’s pop classics like The Beatles and The Kinks with a vintage meets garage rock fidelity.   Taking a break from the road in 2016 the band retreated to Vancouver Island to write and record their first full length release with producer Colin Stewart (Black Mountain/Sleepy Sun), ‘Slow Wave’ which was released in May of 2017 and showcased a lusher and modern approach to the bands pop sensible rock and roll.