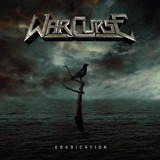 Forged in tradition and unconcerned with industry trends, War Curse walks a path blazed by thrash metal titans of yesteryear while creating a distinct imprint of their own. High energy shows across the map garnered War Curse the reputation of being a must see live act, captivating fans young and old with their thoughtfully written, no holds barred brand of metal. The band’s true to roots Bay Area sound has resonated with crowds and media alike, giving War Curse the ability to transcend genre lines and appeal to everyone from diehards to casuals. Simply put, War Curse is a sleeping giant ready to emerge as the next torchbearer.   Formed in 2013 by guitarists Justin Roth, Joshua Murphy, and drummer James Goetz, War Curse hit the ground running with the release of their debut E.P. Final Days in 2015. Subsequent tours and festival dates across the US elevated the band’s status, drawing them out of the basement and launching them onto the national stage. In 2017 War Curse recruited frontman Blaine Gordon and bassist Jason Vie Brooks (Exhorder / Heathen) to form a more dynamic, experienced line up and wasted no time in getting the new band into the studio.   In 2018 the band’s debut full length album was complete. Every song a reflection on the dire times in which we’re living, Eradication takes on an onslaught of important topics with a take no prisoners attitude and intelligent lyrics for the politically motivated.