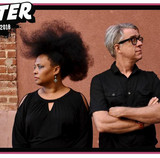 Vocalist Lisa Kekaula and guitarist Bob Vennum formed the BellRays around 1990 in Riverside, California. Originally, the duo leaned heavily toward a vintage R&B sound flecked with smoky jazz overtones. But with the addition of guitarist Tony Fate and Vennum moving to bass, the sound soon began to mix Kekaula's alley cat soul vocals with a biting punk rock bottom end. The In the Light of the Sun cassette appeared in 1993, followed by the "Wall of Soul" 7" two years later. The BellRays issued their debut full-length, Let It Blast, in 1998 and supported it with an extensive tour that included a particularly fiery appearance at Austin's South by Southwest conference. By now, drummer Ray Chin had joined the fold, and the 'Rays were making waves with their furiously passionate sound. The Grand Fury LP dropped in 2001 from Los Angeles indie Upper Cut and was followed by a European release combining it with Let It Blast. Tours with notables like Rocket from the Crypt and Nashville Pussy continued to spread the word, and In Music We Trust reissued In the Light of the Sun. 2003 saw the Upper Cut release of Raw Collection, an odds 'n' sods compilation featuring B-sides, rarities, and vinyl-only material from 1995 through 2002. Red White and Black also arrived in 2003, and the band continued to crank out soulful garage punk on 2006's Have a Little Faith and 2008's Hard, Sweet and Sticky. The group turned to crowd-funding to bankroll their next full-length release, 2011's Black Lightning and summed up the ingredients of their style with the 2017 EP Punk Funk Rock Soul 1, released in December 2017. The full-length companion album, Punk Funk Rock Soul, Vol. 2, followed in February 2018. ~ Johnny Loftus, Rovi