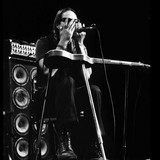 Rocco DeLuca is a California-based musician who came to prominence as the lead singer of the four-piece band Rocco DeLuca and the Burden. Since 2009, DeLuca has toured and recorded as a solo artist. He is known for his use of the resonator guitar and his custom baritone lap steel built by Pavel Maslowiec. His early years were spent studying the likes of Billie Holiday, Nina Simone, and the darker and raw Delta Blues heroes of the 1920s. By an early age, DeLuca had taught himself to play. Initially only playing instrumentally, he later began singing as well. Since then, he has performed around the world as his authentic and unusual lyric and voice have garnered him international attention and acclaim. DeLuca appeared on Jimmy Kimmel, Jay Leno, David Letterman, Craig Ferguson, Jonathan Ross, Kastljós, and Top of the Pops; he appeared on Slash's self-titled solo album; and his music has been featured in numerous commercials, television shows and films.<br><br>DeLuca joined forced with Daniel Lanois once again to create Goodbye To Language, released September 9, 2016. Constructed entirely from the sounds of steel guitars, DeLuca and Lanois contribute a compositional rigor that recalls the 20th century dreamscapes of Ravel and Debussy, with a sense of sonic futurism and yet also with the naturalness that can only come from artists rooted in centuries of grassroots music. Robert Plant for Uncut Magazine featured Goodbye To Language as one of the best albums of 2016.<br>