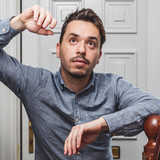 His life – as well as his path along it - changed at the age of 13 when his uncle played him Daft Punk’s debut album, Homework. Duly influenced and inspired, it was around this time that Mike took his first steps towards making his own music. Slowly but surely, the journey continued. A pivotal moment arrived in 2011 through a good friend, Christian F, one of Portugal’s most high profile DJ. Approached by the DJ to produce Bring It On Now, it was Mike’s first commercial work to be released. In 2014, Mike moved from Portugal to Ireland. Before he moved, however, he embarked on what many people would describe as a Great Adventure: he hitchhiked all the way from Portugal to Norway. In winter. Between couch surfing, being left at the side of the road, and tapping away on his laptop every day to make sure he had somewhere to sleep for the night, Mike had little time to do anything else but think about moving forward – one day after another. It takes time to process creativity, of course, but the residual experiences of Mike’s expedition in the winter of 2013 can be heard on his debut solo album, Hitchhiker. Produced by Mike, the mostly instrumental album wears its influences proudly. Across a dozen tracks, from Jvlia (the Roman name of his Portuguese hometown, Beja) to Portobello (the Dublin area where Mike has lived for some years), the journey, as well as the mindset, is explored in what amounts to a route of discovery. Learn more at www.mikevanrose.com