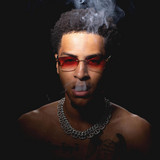 Though he got his start with a traditional, lyrics-based focus, East St. Louis rapper Comethazine turned his focus toward bass-heavy, trap-inspired party-starters similar to Lil Pump and Lil Uzi Vert. After issuing a series of singles and EPs in the mid-2010s, he released his debut full-length, Bawskee, in 2018.   Born Jahmier Velazquez in 1998, he was a lean-loving high-school dropout. Influenced by Nipsey Hussle, Odd Future, Lil B, and Chief Keef, he started rapping in 2015. He soon discovered that his initial output was not as well received as party-oriented cloud rap, so he switched angles and scored a pair of local underground hits with "Run It" and "Hella Choppers." The Aloe Vera EP landed in 2016, which resulted in a late-2017 deal with spotify:search:label%3A%22Alamo+Records%22 . A slew of short singles followed, including "Deathwish," "Piped Up," "Oowee," and "Hero." "Bands" became a viral hit, landing on his first full-length, Bawskee, which debuted on the Billboard 200 upon its release in 2018. ~ Neil Z. Yeung, Rovi