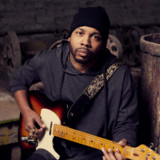 Guitarist & singer Ayron Jones whose songwriting is filled with raw emotion is the new sound of Seattle. The gritty, genre-blending artist is an amalgam of the incredibly rich history of the city from Jimi Hendrix to Nirvana. Cultivating a robust following in the Pacific Northwest his independent rise allowed him to hone his creative vision before signing with Big Machine/John Varvatos Records. His debut single “Take Me Away” cemented that vision and chart topping success, hitting Top 5 at Rock Radio and setting the bar for singles to come, including his latest “Mercy.” The song, full of charged lyrics and melodies, strongly captures a collective consciousness of the time. It is also, though, underscored by a vision of hope and endurance: through it all, we persevere. His highly anticipated forthcoming album CHILD OF THE STATE is out 5/21! As Jones continues his ascent in the Rock World he also continues breaking barriers, as he explains "being black in the rock industry, I was forging a path into establishments and onto tours that had not previously embraced an artist like me. But the one thing that always changed minds and spoke for itself was the music.” His reach now extends well beyond Seattle, playing alongside such acts as Run DMC, Public Enemy, Rahkim, Jeff Beck, Theory of a Deadman, Robin Trower, and Spearhead, as well as opening for iconic acts such as Guns ’N’ Roses at the Gorge and B.B. King.