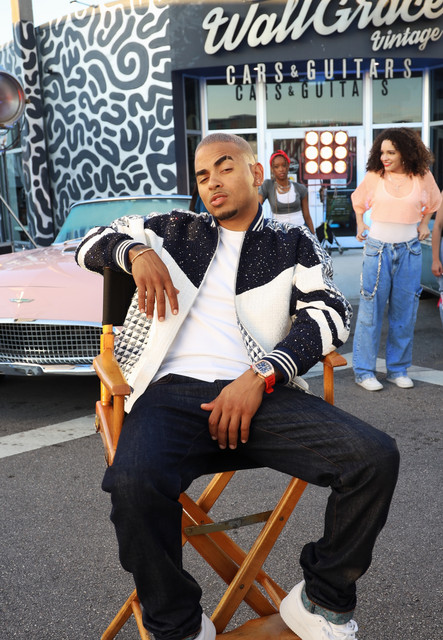 Juan Carlos Ozuna Rosado, professionally known as Ozuna, is a record-setting, award-winning reggaeton singer and songwriter from Puerto Rico. He writes positive, uplifting songs that encourage people to work toward their dreams, while avoiding the use of profanity out of respect for his daughter. He made his breakthrough in 2016 with the single "La Ocasion," which peaked in the Top 30 of the Hot Latin Songs chart, and he continued with a string of high-profile collaborations before issuing his debut, Odisea, in 2017. A songwriter since the age of 12, Ozuna grew up in Puerto Rico, later spending time in New York City before his career took off. In 2014, he signed a record contract and began posting singles online. By 2015, songs such as "Si Tu Marido No Te Quiere" had become radio hits across Latin America, and he'd performed concerts in numerous countries. In early 2016, he joined DJ Luian, Mambo Kingz, De la Ghetto, Arcángel, and Anuel AA on the track "La Ocasion," which kicked off a modest chart run for the nascent performer. Months later, he released a remix of his song "No Quiere Enamorarse," which featured superstar Daddy Yankee. The song racked up millions of streaming views. He followed with "Dile Que Tu Me Quieres," "Si Tu Marido No Te Quiere [Remix]," and "En la Intimidad," all of which charted in the Top 30. In 2017, Ozuna delivered his full-length debut album, Odisea, which featured guest appearances by De la Ghetto, Anuel AA, J Balvin, and others. Included on the record were the singles "Tell Him That You Love Him," "Your Photo," and "A Flower." In September, the album debuted at number one on the Top Latin Albums chart. He also contributed to a handful of collaborations with Daddy Yankee, Wisin, J Balvin, Chris Jeday, and others. One of the most high-profile duets was 2018's "La Modelo" with American rapper Cardi B, which marked Ozuna's first entry on the Hot 100. His sophomore effort, Aura, arrived later that year and peaked in the Top Ten on the Billboard 200, again debuting at number one on the Latin Albums chart. According to the Guinness Book of World Records, the multi-platinum Puerto Rican-Dominican singer held four world records by the age of 27: He attained one for most videos to reach one billion views on YouTube, another for being the solo artist with the longest reign at number one on the Top Latin Albums chart for his debut Odisea. In addition, he broke the record for most Billboard Latin Music Award nominations, with 23 across 15 categories; he also holds the record for most wins by a single artist with 11. In 2019, Ozuna delivered more than a handful of charting singles including "Baila Baila Baila" (plus two hit remixes), "Amor Genuino," "Vacía Sin Mí" with Darell, "Yo x Ti, Tu x Mi" with Rosalia, "Muito Calor" with Brazilian singer Anitta and, "Hasta Que Salga el Sol." In late November, he released this third long-player, the 18-track Nibiru. Named for a pseudoscientific planet, the set included 18 tracks; it became his third straight number one debut on the Latin Albums chart. Ozuna referred to the outing as an urbano rather than reggaeton album. In addition to some of the aforementioned singles, it included a series of collaborations with Diddy and DJ Snake ("Eres Top"), Snoop Dogg and Anuel AA ("Patek"), Dalex and Nicky Jam ("Reggaeton in Paris"), Swae Lee ("Sin Pensar"), and Sech ("Yo Tengo Una Gata"). Ozuna released one more single from that album in April 2020, "Temporal" with Willy Rodriguez (of Cultura Profética), and guested in the Black Eyed Peas single "Mamacita" along with J. Rey Soul (on the group's album Translation). A couple months later, he issued the summery single "Caramelo." In September 2020, Ozuna released Enoc, his fourth album. In addition to "Carmelo," it included the advance charting singles "Del Mar" (featuring Sia and Doja Cat), and "Una Locura" (featuring J Balvin and Chencho Corleone). Among its 20 tracks were guest appearances by Cosculluela, Myke Towers, Wisin, Arcangel, and Juanka, on steamy opener "Enigma Occultos." Zion & Lennox joined Ozuna on "Que Tu Esperas," and Towers and Karol G both guested on the remix of "Carmelo." The album debuted in the number one spot at Top Latin Albums, and topped numerous streaming charts. ~ Paul Simpson & Neil Z. Yeung, Rovi