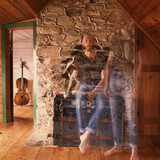 Wes Swing is a singer, cellist, writer, and composer from Virginia. His new full-length album "And the Heart" [2017] is a blend of Swing's literary songwriting with production and analog electronics by Paul Curreri and backing vocals by Devon Sproule. The album is about darkness and light, sadness and joy, and looking for beauty and connection. The revelatory nature of Swing's journey shines through on the new album. Dark, foggy soundscapes and subdued cello melodies slowly focus into moments of clarity, overtaken by a symphony of vocal harmonies, strings, synths and pounding beats, before receding back into an instrumental dreamworld.

"The compositions, pieced together very carefully, are orchestral without orchestra. They are movements, and they are moving. They take place in that grey area between pop and symphonic." - No Depression. Wes Swing's musical journey began as a four-year-old violinist. He developed an early appreciation for classical music, and later found his true musical love in playing and composing for cello while studying Latin at university. After graduating with a Latin degree, Wes taught for three years before quitting his teaching job and turning to music full time. Swing’s music is featured regularly on NPR and by several modern dance companies. In addition to music, he is currently writing a book of short stories