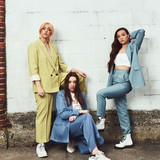 The genzennial collective of Sami Bearden, Savana Santos and Sam Backoff are provocative creators who are unconventionally fun – in love with life, each other and getting on with it... by wearing the fresh faces of modern feminism and blowing off being told who girls are supposed to be. Signed to The Valory Music Co./ Tape Room Records, lead singer Savana solo produced and the threesome together wrote their most recent going-viral smash "F2020." The group dropped the song on TikTok and Instagram only. It garnered 6 million views on TikTok in less than forty-eight hours. Matthew Panzarino, Editor in Chief of TechCrunch tweeted the day it was posted, "Sometimes it's hard to call the song of the year halfway through and sometimes it's not @TheAvenueBeat", their previous release “i don’t really like your boyfriend” entered Spotify’s Top 50 Viral Chart. With their stretched staccato vowels and their self-induced euphoria, Avenue Beat’s narcotic harmonies are going viral spilling all the lyrical tea on what 2020 has poured on us all. Bob Lefsetz put it best in his email newsletter, “This song represents the zeitgeist, employing TikTok, profanity, attitude, personality…and it’s more about the message than the money.”