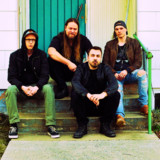 Gloomy patterns, addictive moods and melodic, unconventional music. That's the way how finnish extreme metal band i Helvete swallow the listener to the edge of Northern Darkness. The band took its first breath in 2018 by releasing double-single Pimeyden ytimessä / Umpikuja. After two years of writing new material i Helvete grew from duo to a full band and went back to the studio to record their debut album SINISTEN PUIDEN NIITTY. Already in the early days the band's music was described taking influences from black/viking metal pioneer Bathory. So in the fall 2021 it was time to release a cover of Bathory's epic 10-minute long song Twilight of the Gods. The band released two singles from the debut album, that took band's style and production further. Songs were titled Vihapuhe and Sairaan Mielen Sinfonia. SINISTEN PUIDEN NIITTY is a concept album about the struggle of an individual's own life. When life is total darkness without a shine it's time to wonder about new solutions to end the misery. Album included six songs and was released on the 26th of November 2021. #iHelvete #ExtremeMetal #NorthernDarkness www.ihelvete.com