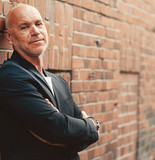 After selling insurance for 11 years, singer Olaf Henning wrote the uplifting dance-pop song "Der Clown (Die Manege Ist Leer)" and landed a recording contract with Polydor. Released as a single in 1998, the song became a big hit selling 100,000 copies thanks to its infectious melody. More light and successful club tracks followed -- "Herzdame" (1998) and "Echt Kacke" (1999) -- but his biggest hit came in 2000 when the fun "Cowboy und Indianer" arrived with it's own lasso-twirling line dance. The track climbed the German charts once again in 2006 when a remix of the song was released as a CD single. ~ David Jeffries, Rovi