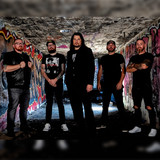 His Name Was Yesterday

Featuring His Name Was Yesterday

Playing with rock and metal icons, Independent tours across the country, and Worldwide distribution of their new Self Titled full length release are all huge accomplishments regarding His Name Was Yesterday. Some artists would find such things sufficient enough, accomplishing dreams in their own right. Is it enough for His Name Was Yesterday? His Name Was Yesterday’s continued success throughout the national scene has gained them critical acclaim touring independently in support of their EP ‘Witness to a Dying World’. Now armed with worldwide distribution and a Self Titled full length record produced by Mike Hatalak & Judah Moses Nero at DWS Studios (It Dies Today – Lividity/ Stemm- Songs for the Incurable Heart - Blood Scent

- Crossroads ) the collective members of HNWY are relentless in pushing themselves further up the ladder. “If the band’s debut EP “Witness to a Dying World” was HNWY’s jumping off point, then the self titled “His Name Was Yesterday” LP is the vehicle that introduces this incredibly talented band to world. It is an effective exclamation point on the bands spot as one of, if not the, best bands the fair city of Buffalo has to offer (the latter is more than likely more true).” –Brian Campbell – Get Exposed! Music