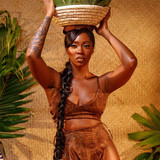 Nigerian-born artist Tiwa Savage – widely regarded as the Queen of Afrobeats – has released her new single, “49-99.” Tiwa Savage explains, “‘49-99’ is a term coined from the hard life many Nigerians go through. A transit bus serves as a case study. It ought to have only 49 seated passengers, however due to poor economic conditions, we often have nearly twice that number of passengers standing (99).” Savage recently recorded “Keys to the Kingdom,” a song that she co-wrote for the soundtrack The Lion King: The Gift after being hand-picked to do so by Beyonce. 2018 was a remarkable year all-around for her. She was named Best African Act at the MTV European Music Awards, making history as the first female to win the award. She was handpicked by Coldplay’s Chris Martin to perform alongside Beyoncé, Ed Sheeran and JAY Z live at the Global Citizen Festival to an 70,000 audience and millions across the globe. Savage’s fearlessness in combining a unique fusion of Afrobeat, R&B, soul and pop paid off, earning her an abundance of award nominations including four Channel O Music Video Awards nominations, five World Music Award nominations, two Headies nominations, MTV Africa Music, BET & MOBO Award nominations and many more.

The U.S. edition of Vogue hailed her as one of the Most Inspirational Women, and in December 2018, British Vogue singled her out as one of 10 women that are changing the face of music globally.