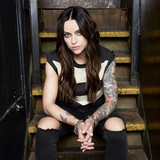 Six million album sales. Four top five studio albums, two of which hit the UK number one. World tours in front of 3.3 million people. Over 200 million Spotify streams. A 2007 single, This Is The Life, that went to number one in ten countries. Fifteen years of continued international success, in which she has resolutely and unfailingly gone her own way. And now her best album yet. The Human Demands, produced by Jim Abbiss of Arctic Monkeys / Kasabian fame, reconnects Macdonald with her alternative roots, and her ability to write classic songs that sound like they have always existed, albeit with a new, Bruce Springsteen-like widescreen grandeur and ambition that suits her powerful, resonant contralto. The album also takes on the kind of heavy themes most of us have to deal with sooner or later: falling in love, burning bridges, facing depression, growing up. All this from an acoustic guitar-playing indie rocker who only ever wanted to share a bill with Travis at Scotland’s T In The Park festival. She has weathered fifteen years of major success in music while remaining her own woman, but now, all these years later, Amy Macdonald is back where she began: with an album that captures the essence of who she is. “I’m back to making music I like and just putting it out in a pure way. It has given me a new love for what I do, all over again.”