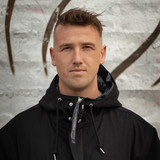 Mark Greene is an electronic music producer and qualified sound engineer based in Ireland. After completing his training in the Sound Training Centre in Dublin under Will Kinsella (Hybrasil), Mark began signing some early tracks to various labels in Europe. Quite soon after, Mark was releasing tracks on well established labels like Bush Records, Naked Lunch, Elektrax and Carl Cox’ longstanding imprint Intec Digital. A string of popular releases allowed Mark to play gigs across Europe with regular trips to Amsterdam, in particular for the annual ADE each Autumn. An avid drummer as a child, Mark has always had an affinity for heavy kick-drums in his tracks. As the years have gone by his productions have gained some bpm and Mark’s music is now finding its way into the hands of DJs at the forefront of the industrial techno scene. Rebekah, I Hate Models, Theo Nasa, Chris Liebing, D.A.V.E. The Drummer, Amelie Lens and more are supporting his productions of late, particularly his original tracks on his newly established DORCHA Records - meaning ‘dark’ in the Irish language. Mark launched DORCHA in 2020 to circumnavigate the typical months-long process of releasing on other labels. DORCHA is a place for Mark to release tracks on his own schedule and experiment with various different styles and creative approaches. The aim of the label is to identify new artists and build a small roster to carry the DORCHA flag.