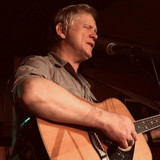 Singer-songwriter Jim Sharkey is an Irish and Americana folk musician. Jim grew up in County Roscommon, Ireland, and came to the US in 1982 when he joined the US Navy in London, England. He spent five years as a photographer on the USS Dixon in San Diego, California, and twenty years working in television and video production in California, North Carolina, and Maine and received numerous awards for his work including 3 Regional Emmy nominations. He taught children with special needs in Westbrook, Maine; Roanoke, Virginia;

and at The Arts Based School in Winston-Salem, North Carolina. He continues to play two or three times a month in Virginia, North and South Carolina, Maryland, and Washington DC, accompanying himself on guitar, harmonica, and sometimes bodhrán. His fourth CD "A Lovely Day" was released in December 2019.