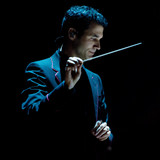 Four-time Emmy and two-time Grammy Award nominated composer Ramin Djawadi has defined his career thus far with celebrated film and television scores such as Game of Thrones, Westworld, Iron Man, Clash of the Titans and most recently A Wrinkle In Time. His engaging and elegant compositions typically average over 2.5 million plays monthly on Spotify. Ramin has frequently collaborated with directors and producers such as Jonah Nolan Lisa Joy and J.J Abrams (Person of Interest Westworld). Most notably, he has worked with David Benioff and D.B. Weiss on Game of Thrones. Ramin’s “Main Title Theme” has become almost as essential to the show as the Iron Throne. In 2017 he transported the music from Game of Thrones into sold out arenas nationwide during the Game of Thrones Live Concert Experience presented by HBO and Live Nation. The Game of Thrones Live Concert Experience will be coming back in 2018 making it’s debut in Europe in May before returning for it’s second run in North America in September.