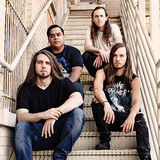 When Forever Ends is a progressive metalcore band coming out of the heart of Central Texas, known for their combination of technical instrumentation and vicious breakdowns. The band is currently unsigned, as has a trio of self-released projects since 2015, culminating the the band's first full-length record, Return To Your Rest. RTYR was produced by Geoff Rockwell (Memphis May Fire, Forever The Sickest Kids, Crown The Empire) and features Micah Kinard (Oh,Sleeper) on the first track, deathWorks. Throughout the record, themes of faith and fear are primarily explored through a mix of vulnerability and allusions to other works of literature and art. The album has brought about a grassroots, word-of-mouth movement that has made fans all over the globe. In the summer of 2019, the band was invited to play an evening slot at the renowned Audiofeed Music Festival (formerly Cornerstone) in Champaign-Urbana, IL. Currently, the band is in the process of writing and releasing another EP, slated for a mid-2020 release. The first single from that record, Divinity.Missing will be released on November 29th. ​