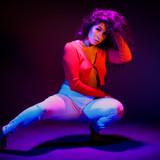 Lolita is a rising artist who burst onto the streaming scene in 2018. Lolita combines a variety of compositional elements to form her unique and authentic sound. To date, Lolita has six singles in her online discography, amassing hundreds of thousands of streams on Spotify alone. Her most recent single release was: ‘Sober Without Your Love’, which dropped November of this year and has already amassed thousands of streams. With a growing number of listeners and followers, there is no denying the fact that Lolita has developed a dedicated following of loyal fans who will be eager to hear her upcoming release: ‘I'm Not Waiting.